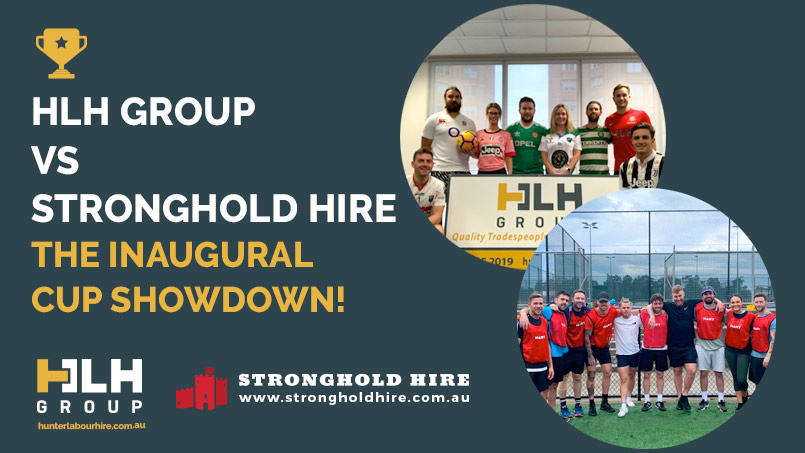 Friday the 4th of September marked the inaugural HLH Group vs Stronghold Hire Cup, a day filled with various sporting events to give the winning team a years’ worth of gloating and bragging rights over their competitors. With years of “we’d beat you” taunts from both sides, it was finally time to lock horns, with all eyes on the outcome of the football, touch rugby and running events in particular. Both teams were stacked with an impressive array of talent with some competitors coming into the event in great form from previous office races and flying high in their own football league (c’mon the mighty Mosman FC). 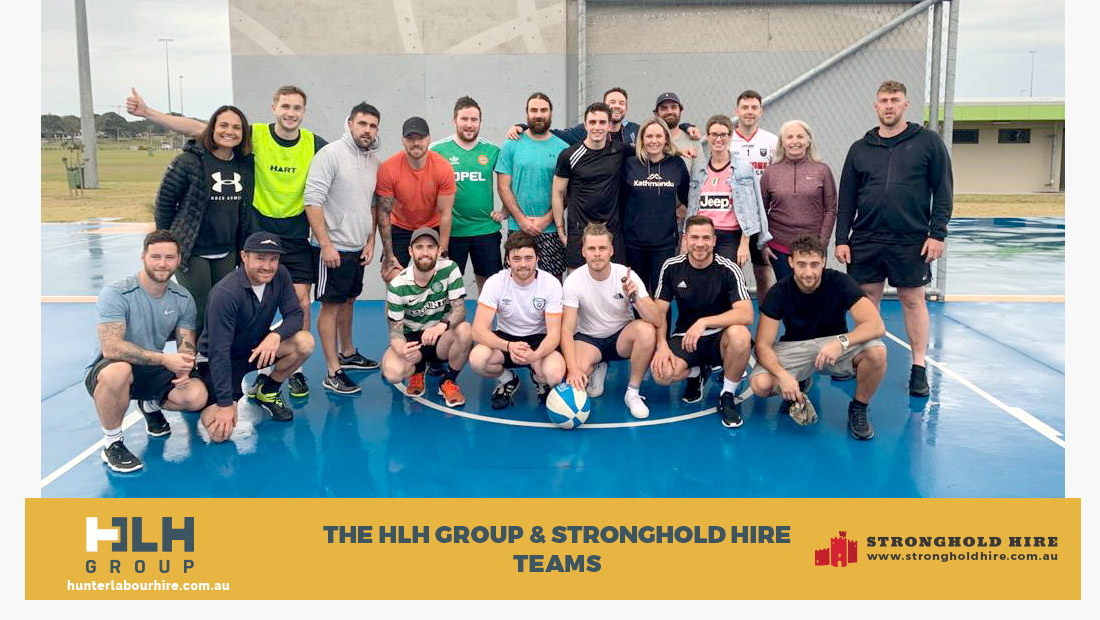 The venue was set for Heffron Park but a late wet weather check seen the action moved to Matraville Indoor Sports Centre, a controversial decision that caused much uproar in the Hunter Labour Hire office and threw out much of the pre-match preparation. A decision that raised more questions when the Stronghold Hire team arrived fully prepared with indoor astro football boots while the late change meant the HLH team were left to play in their running shoes. 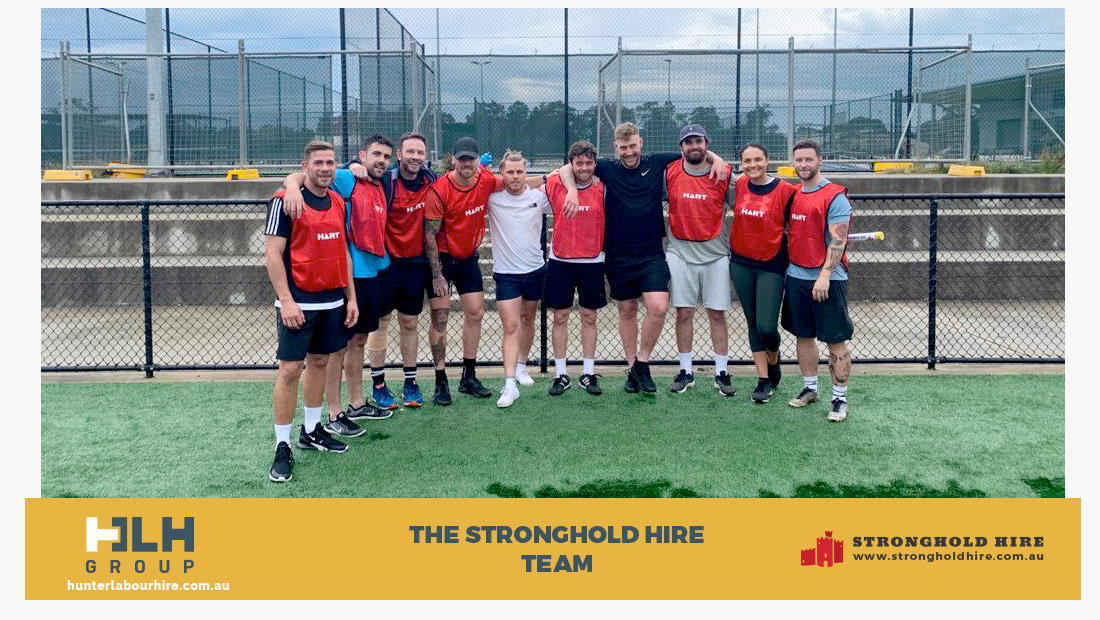 With a strict schedule of events to follow it was straight into action at 2pm with the first event of the day being archery. A strong favourite for the event, Craig Pritchard from Stronghold was 1st up but failed to deliver on the pre-match hype as did a previous winner in archery Joe Newman from HLH. With each team taking it in turns to aim their shot as close to the bullseye it was neck and neck at the death. With HLH last, to take aim it was Jacinda Hendrikx who stepped up and snatched the win with a bullet arrow straight down the middle. The HLH team take the first point of the day. HLH Group 1-0 Stronghold Hire 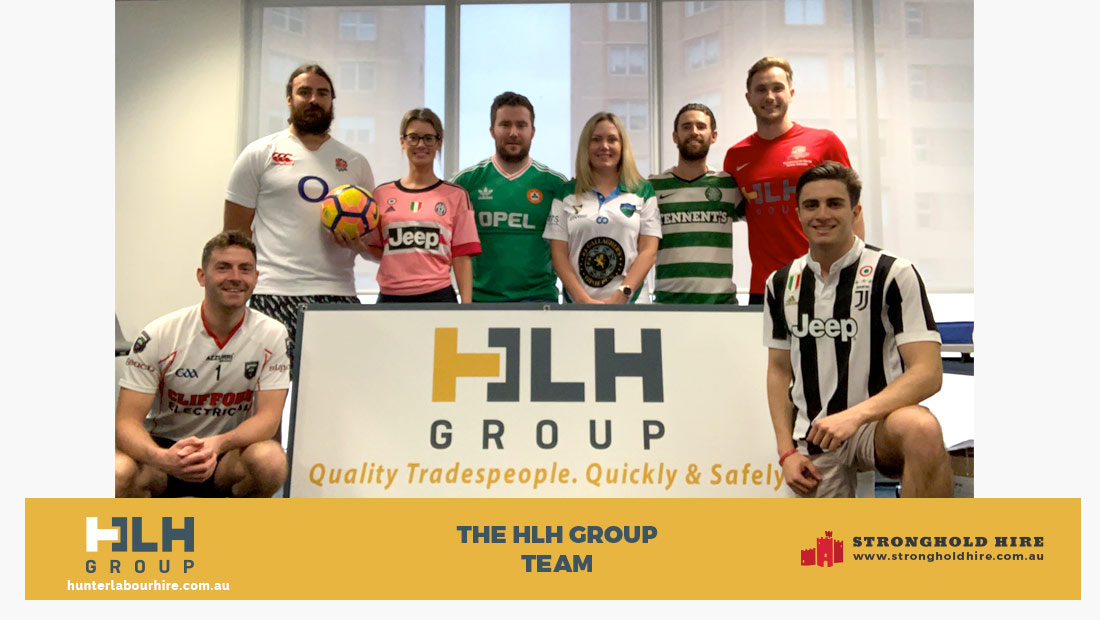 No Debating The Football Results

6-a-side football was next up and this was the event that would see years of debate finally settled as we got to see who would win and take the 2 points available. The change of venue meant the pitch was half the size of the original playing field, playing right into Stronghold Hire’s compact, defensive playing style while restricting Hunter Labour Hire’s free-flowing, fast, tiki-taka, samba football. The game started at an electric pace with end to end action as Hunter Labour Hire broke down the Stronghold defence with intelligent, intricate link-up play and Stronghold got up the field on the counter with a long ball hoof. The deadlock was broken with team HLH taking the lead through a well-taken finish by Sean Day, following up from the keepers save to tuck away for 1-0. Stronghold managed to claw themselves back into the game shortly after with the ball taking a wicked deflection off the heel of Michael Graham and catching everyone out. Shortly before half time Stronghold managed to capitalise on a loose ball from Laird Ross and scored for the 2nd time, taking a 2-1 lead in at the half time. After oranges, Powerade and some strong words were exchanged between the HLH boys it was back out for the 2nd half. With Stronghold seemingly forgetting the no sliding rule, Ryan Barnard in particular, they managed to score another goal midway through the 2nd half. HLH searching for a goal against a very physical team were then caught out again as a mix up at the back between Roddy MacLean and Michael Pantaleone saw Stronghold score an easy 4th, Pantaleone clearly still suffering the effects of taking a shot to the face earlier in the game. As the final whistle blew it was elation for Stronghold and heartbreak for HLH Group. Final score HLH Group 1-4 Stronghold Hire.
HLH Group 1-2 Stronghold Hire

Getting Into the Swing of Things

With a break in the rain outside it gave us a chance to move outside and start of the outside events. Swingball followed on from Football and while the HLH boys were still deflated at the result from football the girls stepped up and took the point for team HLH. Sorcha Hunter, Sarah Bennett and Jacinda Hendrikx all playing a part at the series were levelled up at 2 apiece.
HLH Group 2-2 Stronghold Hire

We Decided To Go For A Little Run

Next up where the running events of 100m sprint and 600m team relay. Going into the event all eyes were on Joe Newman who only weeks earlier had taken the crown of HLH’s Fastest Employee. After a controversial false start, the race with a run with Joe delivering an effort that would not have looked out of place at the Olympic Games. 1 point to HLH.

After the sprinters had caught their breath it was straight into the team relay that promised to be very close. Laird Ross and Alisha Pritchard started the event for HLH and Stronghold respectively. With Laird passing on the baton with a slender lead, that lead was blown out as a mix up for team Stronghold led to a dropped baton and a few precious seconds gained by HLH Group. Jamie Thomas managed to close the gap but ultimately it was too much and HLH Group sealed another comfortable win in the running, securing another precious point. Stronghold left to rue the dropped baton which was ironically made out of scaffold tube.
HLH Group 4-2 Stronghold Hire 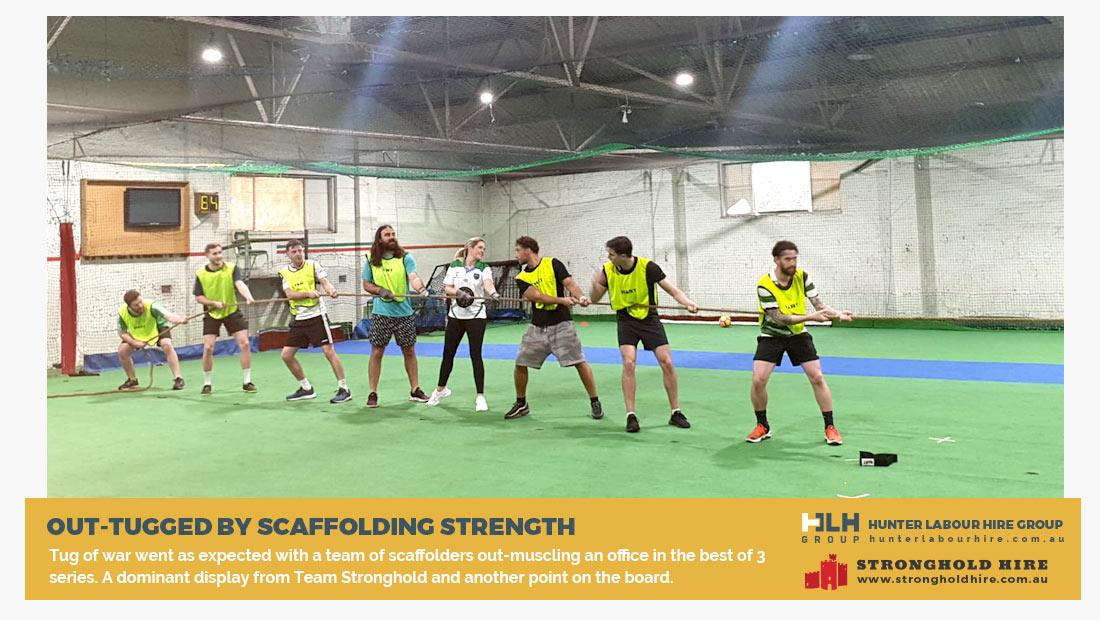 Tug of war went as expected with a team of scaffolders out-muscling an office in the best of 3 series. A dominant display from Team Stronghold and another point on the board.
HLH Group 4-3 Stronghold Hire

Oz-tag was the second team event with 2 points up for grabs and gave team HLH the chance to take a 3 point lead or for Stronghold to leapfrog and take the lead again. With experienced rugby players like Michael Pantaleone and Nigel Hunter as well as GAA player Damian Sweeney in the starting line-up, HLH Group went into the game with huge confidence. That confidence was soon wiped out with Stronghold running into a 2 try lead before Nigel Hunter pulled one back after some great link-up play with Roddy MacLean. The introduction of Joe Newman for HLH changed the game and unfortunately for HLH, it was not for the better. Like a deer caught in the headlights, he was helpless as a Craig Pritchard inspired side scored another 3 tries without reply to put the game to bed. A flurry of late tries from both teams saw the game end in an 8-4 victory for Stronghold Hire. HLH Group 4-5 Stronghold Hire

In West Sydney, Born and Raised…

The last event at Matraville Sports Centre was basketball hoops with 5 players from each team taking 2 throws each. Again the wheels fell off for team HLH with the experienced netball shooter Alisha Pritchard leading stronghold to another win and a 2 point series lead.
HLH Group 4-6 Stronghold Hire

The Battle Has Ended, Not The War

With the rain well and truly settled in for the afternoon the decision to postpone the final event, lawn bowls, was taken to ensure the safety of all players involved. After much debate and protest from both sides, the decision was taken to play the final event instead of awarding a tainted title to Stronghold. A decision welcomed by team HLH but ferociously contested by a certain Ryan Barnard from Stronghold. And with that being concluded the cup returned to the HLH Group office where it will wait until lawn bowls have been played and the real, undisputed winner will finally triumph. Stay tuned, stay tuned! 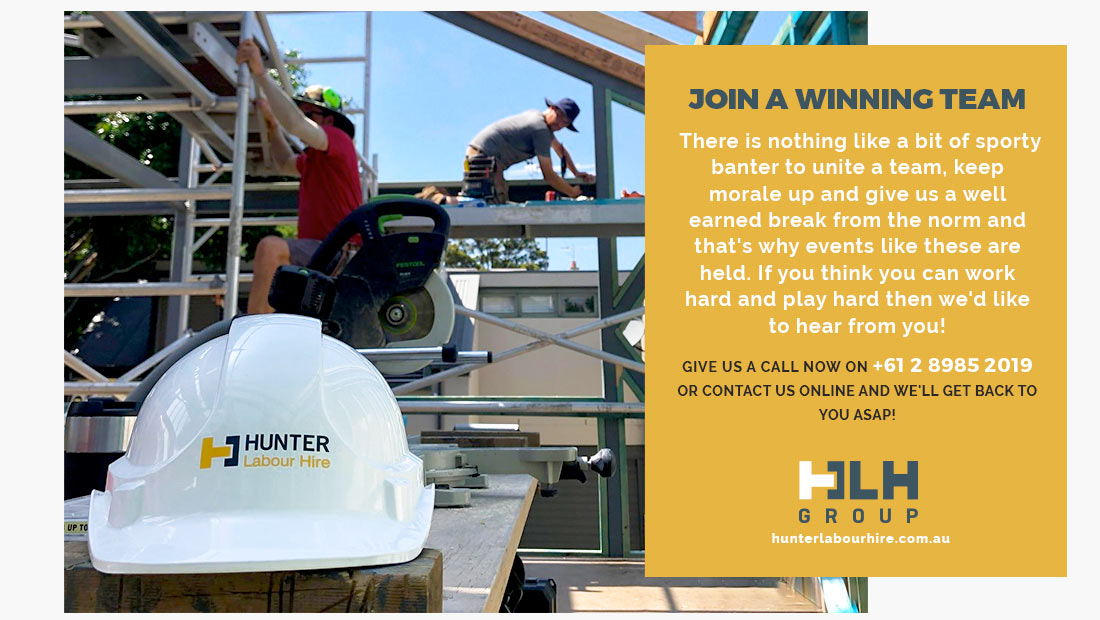 As you can see from the above at the HLH Group and Stronghold Hire we’re all about the working hard and playing harder. There is nothing like a bit of sporty banter to unite a team, keep morale up and give us a well earned break from the labour hire norm and that’s why events like these are held. If you think you can work hard and play hard then we’d like to hear from you! Check out the labour hire positions that are currently available and get in touch with the team and we’ll get back to you asap!